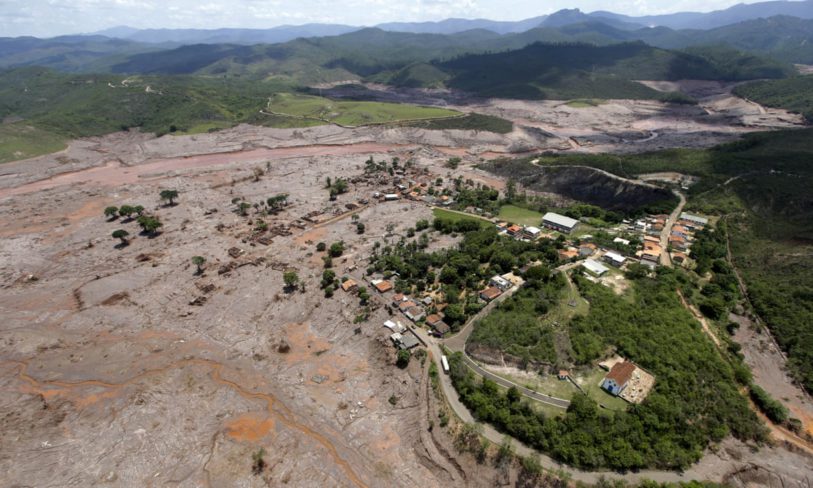 iron ore tailing dams collapsed in Minas Gerais State, Brazil, spilling liquid waste into the town of Bento Rodrigues. Nine people were killed and thousands have been affected. Bento Rodrigues is located in southeastern Brazil, with a population of 620.

The town hosts an iron ore mine, which created three dams storing waste materials left over from the ore processing. At the collapse, the dams flooded the city with toxic materials. Residents have been ordered to evacuate to higher ground, and there are concerns of further mudslides. The residents were forced to seek shelter without warning only when seeing the flood approaching. The rescue teams had difficulty locating and evacuating residents as helicopters could not reach them.

The mine is owned by Vale and BHP Billiton. Samarco, the company running the mine, has promised to minimize damages. It was reported that the third dam was secure and not expected to breach. Due to the toxic waste, water service was suspended in Minas Gerais and Espirito Santos states, affecting thousands.

This mission report details the activities of a UN Environment/OCHA Joint Unit team deployed following a cyanide spill in Romania.

Environmental action in response to the Peru Earthquake: an example of best practices

This document details the rapid environmental assessment (REA) and lessons learned from the international response to an earthquake in Peru in 2007.

The FACTS website and knowledge hub is an accident database containing information on more than 25,700 industrial accidents and incidents involving hazardous materials or dangerous goods.

First report of the Advisory Group on Environmental Emergencies

This report details the first meeting of the Advisory Group on Environmental Emergencies (AGEE), which created the UN Environment/OCHA Joint Unit (JEU).

A mission report covering the technical scoping mission jointly conducted through the UNDAC system and the JEU, regarding a dam stability assessment in the Solomon Islands.

This document describes the environmental damages identified through a rapid environmental assessment following a tsunami in Samoa.

This mission report presents the results of a UN expert mission in response to a fire that took place in a transformer depot, at the National Electrical Administration (ANDE) in Paraguay.

This mission report describes the fire assessment conducted by an expert following a response mission by the Global Fire Monitoring Center in Peru.

This mission report describes the results of a mission by the UN Environment/OCHA Joint Unit following mass-flooding and a potential dam collapse in Guyana.

This mission report describes the Rapid Environmental Assessment (REA) conducted by an expert deployed by the Swiss Agency for Development and Cooperation through the UN Environment/OCHA Joint Unit.

This mission report describes the finding of an environmental expert in Haiti, who was deployed to assess water contamination in 2016 following Hurricane Mathew.

This report describes the rapid environmental assessment conducted by experts following an earthquake in Ecuador.

The Environmental Experts Hub (EEHub) provides practical guidance to experts deploying for environmental emergency preparedness and response missions through the UN Environment / OCHA Joint Unit (JEU). On this page, you will find all the necessary information, guidance, tools and training materials in preparation for…