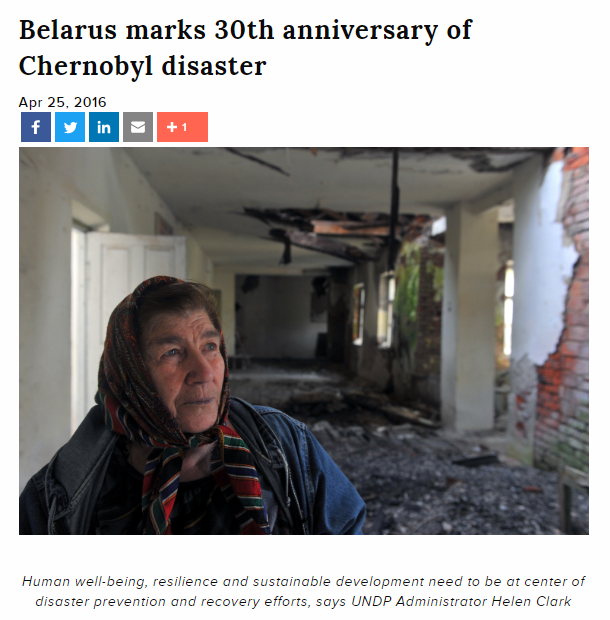 , the nuclear disaster in Chernobyl still has an important impact on the lives of people in Belarus, Ukraine and the Russian Federation. However, communities have shown unparalleled resolve to chart a more sustainable future.

In light of the anniversary, a conference was held to highlight lessons learned. In his address to the conference participants, UN Secretary-General Ban Ki-moon stressed that Belarus’ experience in responding to the tragedy could be used by people everywhere to manage the consequences of disasters. Missed profits in Belarus are estimated at US$ 13.7 billion. In addition, 470 small towns and villages had been erased from the map of Belarus with 138,000 people unrooted from their homes. Thanks to strong partnerships with the International Atomic Energy Agency (IAEA), UNDP, the United Nations Children’s Fund (UNICEF) and the World Health Organization (WHO), significant achievements have been made to provide local stakeholders with scientifically-accurate information.

With UNDP’s support, 21 Chernobyl-affected districts have equipped themselves with better health monitoring and healthcare services, opportunities for job creation, world-standard systems for radiological quality control and a sense of pride and cultural heritage. Through projects implemented over the span of a decade, almost 17,000 women have been screened for breast cancer, and more than 2,000 rural smallholdings have learned to grow safe crops, rear cattle and market their produce in neighboring regions. On average, these small businesses have increased their market profits by 5-20 percent. With financing of UNDP projects from the European Union (EU), new models for promoting leadership and citizen engagement in decision-making involved close to 11,000 people in the formulation of local projects.

During her official visit to Minsk, Helen Clark received an award from the Republic of Belarus, the Francysk Skaryna Order, in recognition of UNDP’s work to promote development in Belarus and to support the recovery of Chernobyl-affected communities. Helen Clark, together with the Minister of Foreign Affairs, Vladimir Makei, and Scott Rauland, U.S. Chargé d’Affaires in Belarus, inaugurated a new school named after U.S. citizen Ruth Waller, an employee of the UN Relief and Reconstruction Agency (UNRRA) who dedicated herself to servicing communities in post-war Belarus.

A case study provided by the UN Office for Coordination of Humanitarian Affairs (OCHA) on the linkage between Humanitarian and Nuclear Response Systems.

This publication details a post-disaster assessment involving the UN Environment/OCHA Joint Unit, which evaluated the long-term impacts of the Chernobyl nuclear accident.

The Joint Emergency Management Plan of International Organizations (Joint Plan) describes the inter-agency framework of preparedness for and response to an actual, potential or perceived nuclear or radiological emergency.

This mission report describes an inter-agency mission which assessed potential contamination following an uranium mine collapse in Congo.

The FACTS website and knowledge hub is an accident database containing information on more than 25,700 industrial accidents and incidents involving hazardous materials or dangerous goods.

A brochure provided by the International Social Security Association (ISSA) offering practical guidance on where and how chemicals should be kept, in particular for small and medium-sized enterprises.

The Inter-Agency Coordination Group Brochure on Industrial and Chemical Accidents

This brochure presents the specific work of international organizations and institutions regarding the prevention, preparedness and response to chemical and industrial accidents.

This mission report describes the activities of environmental experts deployed in Jilin, China, following an explosion at a petrochemical plant.

Addendum to the OECD Guiding Principles on Natech Risk Management

The second addendum to the OECD Guiding Principles for Chemical Accident Prevention, Preparedness and Response, which outlines considerations for natural-hazard triggered technological accidents.

On 5 November 2015, two iron ore tailing dams collapsed in Minas Gerais State, Brazil, spilling liquid waste into the town of Bento Rodrigues. Nine people were killed and thousands have been affected. Bento Rodrigues is located in southeastern Brazil, with a population of 620. The town hosts an iron…

The Environment and Emergencies Forum (EEF) is a unique global event organized by the UN Environment/OCHA Joint Unit (JEU). The Forum brings together stakeholders from around the world to showcase innovations in environmental emergency preparedness and response, and to highlight current efforts on integrating environmental risk in humanitarian action.