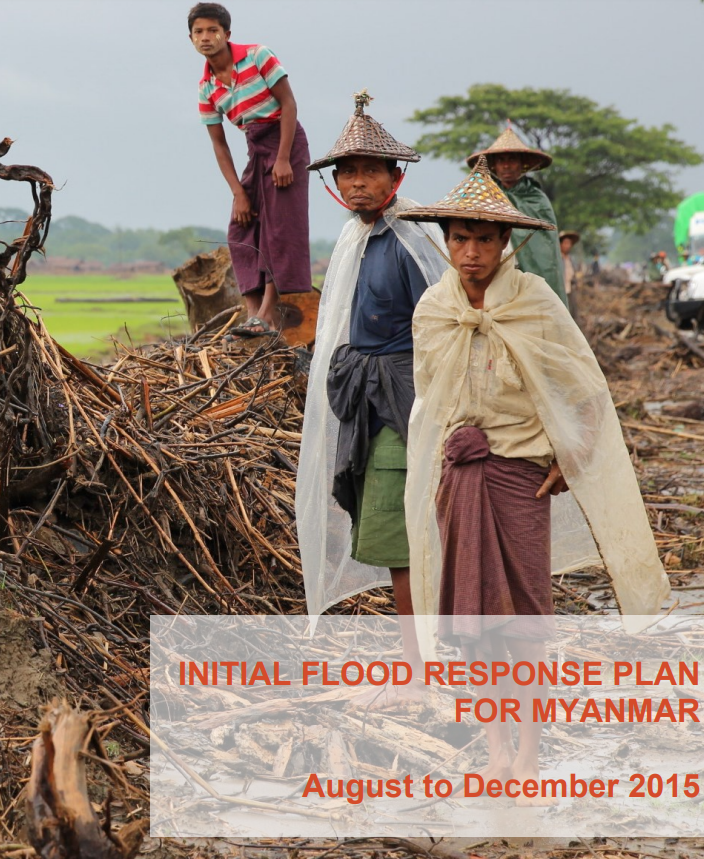 Initial Flood Response Plan by OCHA details the requirements and the response to the flood emergency in Myanmar, which became part of the 2015 Humanitarian Response Plan (HRP).

In June 2015 heavy rains caused floods and landslides in several parts of Myanmar. On 30 July, a tropical Cyclone called Komen originated near the southern coast of Bangladesh and brought strong winds and additional heavy rainfall to the country. This resulted in widespread flooding across 12 of the country’s 14 states and regions. Response missions on behalf of the UN and partners were activated immediately and a range of additional actors provided agriculture inputs, food, shelter materials, non-food-items (NFIs), water, sanitation, protection and health services to support the government and affected populations. The Initial Flood Response Plan responding to the flood emergency in Myanmar became part of the 2015 Humanitarian Response Plan (HRP), which aims to support governments and local communities in order to ensure that the lives, dignity and wellbeing of persons affected by conflict/disaster are being protected.

The 2015 Myanmar's Initial Flood Response Plan by OCHA, which called for $75.5 million to cover the needs of over 580,000 people in six regions that were affected by floods in summer of 2015.

The Joint Emergency Management Plan of International Organizations (Joint Plan) describes the inter-agency framework of preparedness for and response to an actual, potential or perceived nuclear or radiological emergency.

A case study provided by the UN Office for Coordination of Humanitarian Affairs (OCHA) on the linkage between Humanitarian and Nuclear Response Systems.

This mission report describes the activities of environmental experts deployed in Jilin, China, following an explosion at a petrochemical plant.

This joint UN / Government of Bangladesh mission report outlines the findings of an assessment following an oil tanker accident in the Sundarbans of Bangladesh.

UNISDR – Words into Action Guide for Man-Made and Technological Hazards

The Words into Action (WiA) Implementation Guide for Man-Made and Technological Hazards made by UNISDR, OCHA and UN Environment.

WHO – Chemical Releases Caused by Natural Hazard Events and Disasters

Guidelines and information to planners in the health sector and to public health authorities seeking to learn more about chemical releases resulting from natural hazard events.