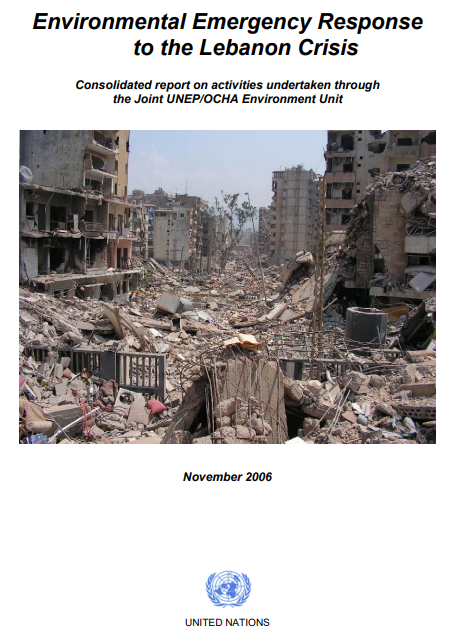 report describes the UN Environment/OCHA Joint Unit’s mission in Lebanon following hostilities between Hezbollah and Israel, which led to a major oil spill at the Jiyeh power plant.

Open hostilities between Israel and Hezbollah led to heavy aerial bombardment of Lebanon, particularly in the south of the country and in south Beirut. The conflict resulted in loss of life, injuries and considerable damage to Lebanese industrial installations and infrastructure. From the beginning of the crisis, the JEU monitored and identified potential acute risks, such as chemical spills occurring as a result of damage to industrial infrastructure. Numerous players were involved in the environmental response efforts at the international level, giving rise to a need for effective coordination. The JEU played a key role in coordination and sharing knowledge, issuing environmental updates as the crisis developed and providing input into the OCHA Humanitarian Situation Reports. The JEU also organized and chaired regular stakeholder conference calls that provided a forum for information sharing, ensured maximum efficiency and minimized overlap.

In Lebanon, the JEU set up an Oil Spill Operations and Coordination Centre within the Ministry of Environment. During the aerial blockade of Lebanon, UN Environment’s Executive Director played a key role in getting Israeli agreement for aerial surveillance flights along an ‘environmental corridor’. This allowed the response team to assess the extent of the spill.

This joint UN / Government of Bangladesh mission report outlines the findings of an assessment following an oil tanker accident in the Sundarbans of Bangladesh.

This document describes a Rapid Environmental Assessment (REA) undertaken by the UN Environment/OCHA Joint Unit (JEU) following an oil spill in the Republic of Korea.

This mission report details the deployment of experts following an oil spill in Pakistan, which include recommendations advocating for the creation of a ecosystem restoration framework.

This mission report describes the activities of the UN Environment/OCHA Joint Unit in Lebanon during hostilities between Hezbollah and Israel.

This study requested by the AGEE considers ways to improve the international framework for environmental emergency response and preparedness.

A case study covering the response actions following the Super Typhoon Haiyan/Yolanda that hit the Iloilo Province in the Philippines in December 2013.

A case study providing analysis and assessment of the extent to which environmental concerns have been mainstreamed in humanitarian action in Haiti.

A summary mission report of the technical support provided to assess the river contamination in the La Pasion River of Guatemala in 2015.