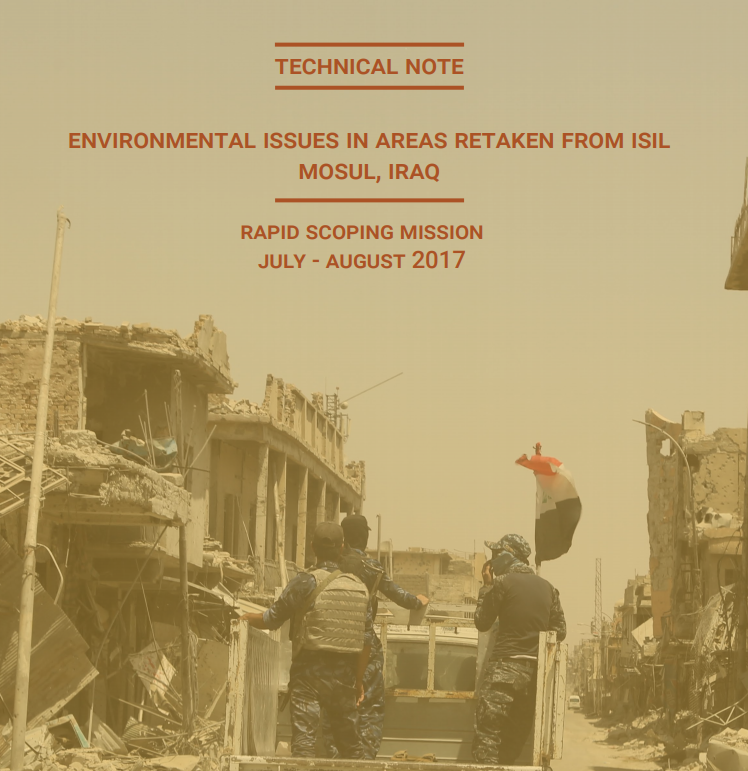 Technical Note addresses the environmental impacts of looting and systemic sabotage in regions that have been recaptured by ISIL.

Iraq has experienced widespread destruction of civil and industrial infrastructure from systematic and extensive sabotage and looting by ISIL (so-called Islamic State in Iraq and the Levant, alias Daesh), as well as from airstrikes and military operations to recapture these areas. One of Iraq’s largest cities, Mosul, is at the centre of one of the world’s largest and most complex humanitarian operations with over one million displaced persons. As commercial and industrial hub, Mosul is also where environmental impacts are considered to be of greatest concern given the high level of infrastructure destruction, the large number of hazardous sources, and the potential size of the exposed population.

You can consult the technical note here.

A mission report from the Joint Research Centre of the European Commission mapping of dam failure scenarios for Mosul Dam in Iraq.

This mission report describes a deployment by the UN Environment/OCHA Joint Unit and UNDAC following an explosion at a ammunition facility in Albania.

This mission report describes the rapid environmental assessment conducted by experts deployed to Pakistan following an earthquake in 2005.

Report by the UN Environment/OCHA Joint Unit which explores how the expansion of cash-based humanitarian responses introduces new opportunities and issues in the interaction between humanitarianism and environment.

First report of the Advisory Group on Environmental Emergencies

This report details the first meeting of the Advisory Group on Environmental Emergencies (AGEE), which created the UN Environment/OCHA Joint Unit (JEU).

A case study providing analysis and assessment of the extent to which environmental concerns have been mainstreamed in humanitarian action in Nepal.

A mission report covering the technical scoping mission jointly conducted through the UNDAC system and the JEU, regarding a dam stability assessment in the Solomon Islands.